Karen Rushton is currently completing a number of Wellcome Trust-funded medical archiving and curating projects based at the John Rylands Library. In the latest instalment of our regular series introducing MedHumLab members, she tells us about the nature of the medical collections at JRL, their potential for interdisciplinary and creative engagement, and her interest in medical history (and reading a good book accompanied by cake).

You are Wellcome Medical Archivist/Curator at the John Rylands Library. Can you tell us a bit more about the archives and the kind of material you are working with?

The medical collections at the JRL are quite broad, ranging from early modern manuscripts to the research papers of prominent mid-20th-century physicians and surgeons. Most of my work focuses on cataloguing as yet uncatalogued collections and increasing general awareness of their research potential amongst an academic audience as well as the general public.

I’ve recently completed one cataloguing project relating to a collection of medical manuscripts, which mainly consists of 18th- and 19th-century lecture notes as well as case books, memoirs and pharmacopoeia, most of which originally formed part of the Manchester Medical Society‘s library. There was a heavy emphasis on midwifery and obstetrics in this collection, but the full range of subjects relevant to medical education at the time is covered by the manuscripts, and it’s also important to look beyond the simple content of the manuscripts and consider the former owners of some of these items and what this can tells us about such things as medical networks in 19th-century Manchester.

Just now I’m starting work on a new project funded by the Wellcome Trust, which has as its main focus the cataloguing of several thousand neurosurgery case files reflecting the work of 20th-century neurosurgeon Geoffrey Jefferson, and also a large number of pieces of medical art predominantly created by Dorothy Davison, which have come to us from the Manchester Medical Museum. The neurosurgery files complement a number of other collections held elsewhere in the country and demonstrate the role Manchester physicians/surgeons played in the development of neurosurgery as a specialism, and some of the medical art corresponds to specific cases in the Jefferson files.

How did your interest in medical history develop?

My first job working with archives was at the Highland Archives in Inverness, where I worked with a full range of local history records, but I was particularly drawn to the records of the Highland Health Board, which represented some of the early hospitals in the area as well as records of the pioneering Highlands and Islands Medical Service, so I suppose that’s where my interest really began. Since then I’ve worked on collections relating to treatment of tuberculosis in children in Northumberland, before coming to Manchester to get stuck into the area’s rich medical history.

I was very interested in your recent blog post about the potential of medical archives for creative interpretation. Do you see an opportunity for using the medical collections for creative engagement, perhaps involving students, writers and/or visual artists?

Definitely! I think medical history is quite unique in its ability to engage with such a wide variety of people, given that it ultimately deals with something that everyone can relate to in some way, with people and health at its centre. So many medical archive collections are incredibly one-sided though, with fantastic detail about the science and the medical practice but often very little about the actual patient experience and the wider context of the treatment. This is why I think medical archives not only lend themselves well to more creative interpretation, but it is in itself a very important avenue to be explored. 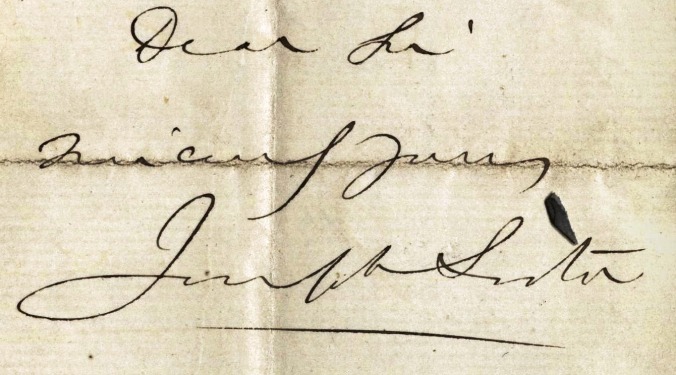 FCC/1/1-3 – Joseph Lister’s signature taken from one of three letters sent by him to Manchester chemist Frederick Crace-Calvert, 1867-1871

How would you describe the concept of ‘medical humanities’ in the context of the medical archives at John Rylands Library more generally?

I think the primary and secondary resources held across the library’s collections act as an ideal starting point for interdisciplinary work with so many different research routes presenting themselves from a single collection, or even a single item; they can act as a unifying aspect for such work.

And finally, how do you relax and unwind away from the archives and collections?

I spend a lot of my free time visiting friends around the country as well as exploring Manchester’s many pubs/cafes. I also love a good book… more so accompanied by a bit of cake.